In a normal hip, the head of the femur moves smoothly within the hip socket enabling movement without pain. With femoroacetabular impingement or FAI, the femur pinches against the cartilage in the hip socket impeding smooth movement and causing pain.

Femoroacetabular Impingement syndrome is a condition affecting the hip joint in young and middle-aged adults. Treatment options vary from conservative treatment to arthroscopic and open surgery.

Many activities involving repeated hip motion increase the frequency of this abnormal contact in FAI sufferers. These include sports such as soccer, ice-skating and gymnastics. However, FAI-related pain may occur within a normal range of motion during actions not normally associated with a need for physical demand such as the motions of sitting down and standing up. 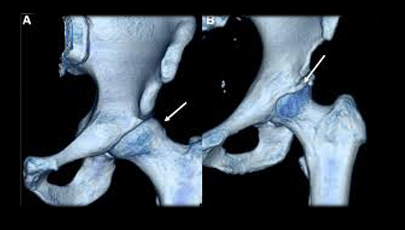 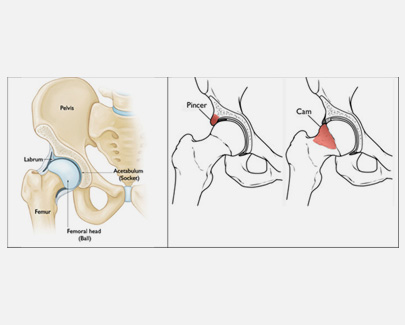 The treatments for FAI vary considerably. Conservative/nonsurgical treatments should always be considered first – this can include reducing levels of physical activity and having pain medication and physiotherapy.

Specifically, Physical Therapy can also help to identify specific movement patterns that may be injuring the involved hip. These types of interventions may be successful in reducing the pain and swelling in the joint.

Due to the condition being diagnosed frequently in adolescents and young adults, various surgical techniques have been developed in order to preserve the hip joint, preventing the need for a total hip replacement and allowing the patient to continue with an active lifestyle. Surgery may be arthroscopic or open.

What is Femoroacetabular impingement?

Femoroacetabular impingement  is cause by the femoral head and acetabulum rub against each other creating damage and pain to the hip joint. The damage can occur to the articular cartilage (the smooth white surface of the ball or socket) or the labral tissue (the lining of the edge of the socket) during normal movement of the hip. The articular cartilage or labral tissue can fray or tear after repeated friction.  Over  time, more cartilage and labrum is lost until eventually the femur bone and acetabulum bone impact on one other. Bone on bone friction is commonly referred to as Osteoarthritis.

CAM Impingement: The Cam form of impingement is when the femoral head and neck are not perfectly round, most commonly due to excess bone that has formed. This lack of roundness and excess bone causes abnormal contact between the surfaces.

PINCER Impingement: The Pincer form of impingement is when the socket or acetabulum rim has overgrown and is too deep. It covers too much of the femoral head resulting in the labral cartilage being pinched. The Pincer form of impingement may also be caused when the hip socket is abnormally angled backwards causing abnormal impact between the femoral head and the rim of the acetabulum.

Most diagnoses of FAI include a combination of the Cam and Pincer forms.

Symptoms of femoroacetabular impingement can include the following:

A risk factor is something that is likely to increase a person’s chance of developing a disease or condition. Risk factors for developing femoroacetabular impingement may include the following:

Make an appointment with Dr Ireland